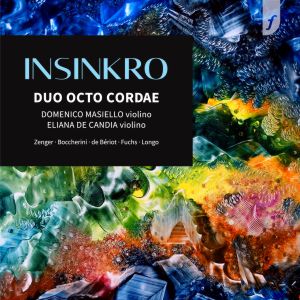 The record label “FARELIVE” presents, after the success of the CD “Recital” in 2018, a new production of the violin duo “Octo Cordae”, the album “Insinkro” which will be available online on all digital platforms starting from 15 February 2020.

After the first record release, and after a 2019 full of concert commitments in Italy (Rome, Bari, Bologna, Turin, Matera) and abroad (Spain, England and Germany), the relationship between the Lucana Label and the young Duo Octo Cordae with a very varied output that ranges between the classic and the contemporary.

The title “Insinkro” derives from the fusion of the terms together and synchrony, two concepts that well represent Chamber Music and the movement of the two violins, simultaneously but also with different directions to complement and integrate into a single music.

The heterogeneity of the styles of the proposed pieces, ranging from Baroque to contemporary compositions passing through Romanticism, satisfies all musical tastes by addressing pages unknown to critics such as the sparkling Sonata by Max Zenger written in a classic almost Mozartian style and the three Phantasiestucke op . 105 nn. 5 and 14, with a playful character and n. 16 with a more lyrical character and broad and profound phrases, by the Austrian composer R. Fuchs, to highlight how the Duo wants to continue the project of rediscovering the repertoire destined for this formation, far from bare, but full of dynamic variations, stylistic and musical. The work of the greatest exponent of Classicism in the neo-Latin countries, Luigi Boccherini (1743-1805) from Lucca is the Duo op. 3 no. 5 which in the first and third beat develops brilliant and carefree times, very different from the second sweeter and sung beat with the exchange of themes, alternating between the two violins. Furthermore, an author now “friend” of the Duo, C.A.De Berio, with the Duo concertante op 57 n. 3 in the first half of which the cantabile themes alternate with extravagant virtuosity opposed to the slower, reflective, almost religious trend of the second. Finally, a novelty is represented by the precious and well-established collaboration with the Roman composer Federico Longo whose disc includes three works, Le phrases in the mirror, Eleven Eleven and La via del corallo, unpublished and written specifically for the Duo, which they explore in depth the intimistic nature of the composer able to walk the sounds of the 8 strings in an authentic way.

The disc, embellished on the cover by the reproduction of a painting by Bonifacio Castello entitled “Journey into the spasm of matter II” his work of 2009, will be presented at the Civic Museum of Bari then continuing with other stages and dates still being defined in Molfetta , Trani, Barletta, Matera until arriving in Spoleto in the month of May.

The violin duo “Octo Cordae” is formed by the violinists Domenico Masiello and Eliana de Candia. Established in 2016 at the “European Arts Academy Aldo Ciccolini” musical improvement academy in Trani under the guidance of Maestro Carmelo Andriani, he studied in Italy with important teachers such as A.Milani and Felix Ayo, and abroad at the Rostock Hochschule fur Musik und Theater. Winner of several competitions, the Duo has performed for important Italian concert bodies and during prestigious festivals and, on April 16, 2019, he made his debut in London at the Elgar hall of the Royal Albert Hall with great success. In 2018 he recorded his first album “Recital” for the Farelive Label, with music by Leclair, Viotti, Wieniawsky and De Beriot, worldwide and also presented on Radio 3, the Classic Tuscan Network and Classic Radio.